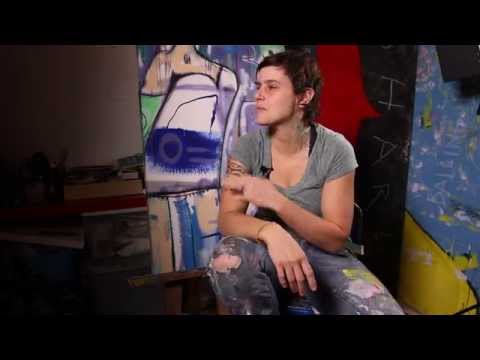 Coming from a family with definite artistic leanings, Julie Touchette, alias Zut, enjoys following in the footsteps of her kin and a father-in-law who’s a painter. A lover of street arts and comic strips, she advocates the spontaneous and simplistic aspect of painting. Her unconventional side and rebellious pencil stroke lend a style that is totally her own. Daringly, she takes us along into her stories and characters. It’s a world filled with passion and emotions, one that we cannot remain indifferent to.

Caught up in an emerging generation, she makes her way through the use of primary colours and different mediums. Of course, there are certain artistic influences along the way, including Jean-Michel Basquiat for his wildness and Pollock for naming the canvas.

Previously involved in the street-artist marketplace, she now displays her artistic prowess in art galleries. Major projects that overflow from Zut’s imagination. Graffiti without borders, limitations or thematic censorship.