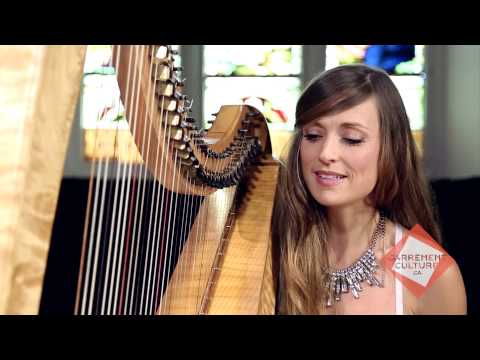 Isabeau graduated with an honours degree in recorder and second harp at the Université de Montréal. She went on to pursue her studies in California under the famed historical harp performer Dr. Cheryl-Ann Fulton.

An astute and talented musician, Isabeau has performed in many concerts and festivals in Canada and internationally. Her musical career has included a performance at the “Joie de chanter” Festival in Martinique. She performed in Holland through the efforts of the Jeunesses musicales du Canada organization. She also played at the “Festival of Harps” and for the opening act of the Cirque du Soleil’s Kooza performance in California.

Isabeau’s musical talents can also be heard on numerous albums and sound tracks, including the sound track of the movie “Du Big Bang au Vivant” by Hubert Reeves and the recording “Sur les traces des Filles du Roy” which was produced for the 350th anniversary of the arrival of the filles du Roy (the King’s daughters).

Isabeau has been developing her interest in composing music since 2007. Her talents in this area are much in evidence on her album “Pour mieux rêver” and she does all the singing and writing on her latest album “La joueuse de harpe”.